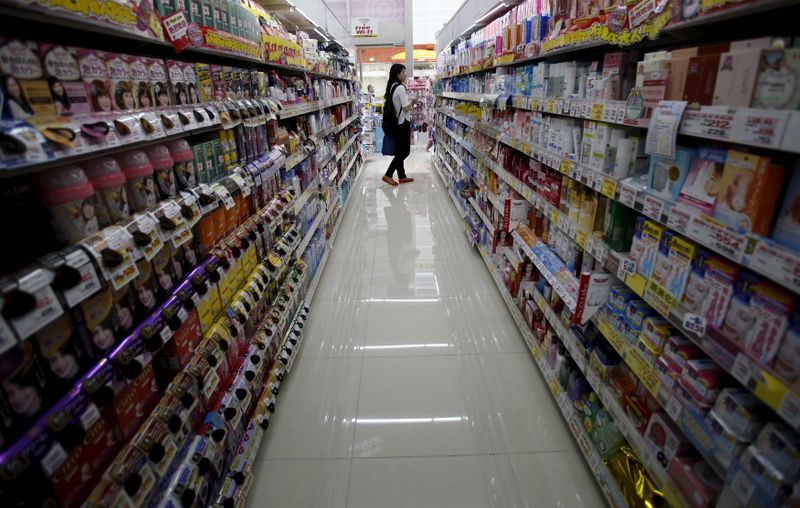 © Reuters. FILE PHOTO: A shopper looks at items at a drug store in Tokyo

TOKYO (Reuters) -Japanese wholesale prices marked their first annual increase in more than a year in March, a sign that rising commodities costs are pinching corporate margins and adding inflationary pressure to the world’s third-largest economy.

Japan’s corporate goods price index (CGPI), which measures the price firms charge each other for their goods and services, rose 1.0% in March from a year earlier, Bank of Japan (BOJ) data showed on Monday, marking the first rise in 13 months.

Markets are turning their attention to the return of inflation as advanced economies recover from the impact of the COVID-19 pandemic last year, forcing some central banks to offer reassurances that a brief uptick in prices won’t trigger a withdrawal of stimulus.

Analysts, however, expect the fallout on consumer inflation to remain more modest in Japan than in the United States, as soft wage growth and slow vaccines rollouts are seen weighing on Japan’s household spending.

The March jump in wholesale prices, which was at the fastest pace since January 2020, exceeded a median market forecast for a 0.5% increase and followed a 0.6% fall in February.

“While there’s still a lot of uncertainty on the outlook, global economic activity is picking up and keeping commodities prices high,” said Kouta Fujiwara, an economist at NLI Research Institute.

“Given the base effect of last year’s sharp fall, Japan’s wholesale inflation may spike to around 3% from April,” he said.

Most of the gain in March wholesale prices was driven by a 29% spike in prices of non-ferrous metals goods and 9.8% rise in those for oil products and coal, showing how a rebound in global demand for commodities pushed up costs for Japanese firms.

Compared with a month ago, wholesale prices jumped 0.8% in March to mark the biggest gain since October 2019.

“The increase is driven mostly by recoveries in U.S. and Chinese economies, which are pushing up global commodities prices, rather than a rebound in domestic demand,” said Shigeru Shimizu, the head of a BOJ division overseeing price moves.

“It’s too early to say price levels have fully returned to pre-pandemic levels,” he told a briefing.

The data will be among factors the BOJ will scrutinise when it conducts a quarterly review of its growth and price forecasts at its next interest rate review on April 26-27.

Japan’s economy has emerged from the initial hit of the pandemic thanks to robust exports. But analysts expect any recovery to remain modest with a renewed spike in infections clouding the outlook for domestic demand.

Years of heavy money printing by the BOJ has failed to push inflation up closer to its 2% target, with core consumer prices falling 0.4% in February from a year earlier.

While rising input costs could help push up consumer inflation, they could also hurt retailers already feeling the pinch from slumping sales blamed on the pandemic.

Japan wholesale prices rise for first time in more than a year, stoked by commodities surge 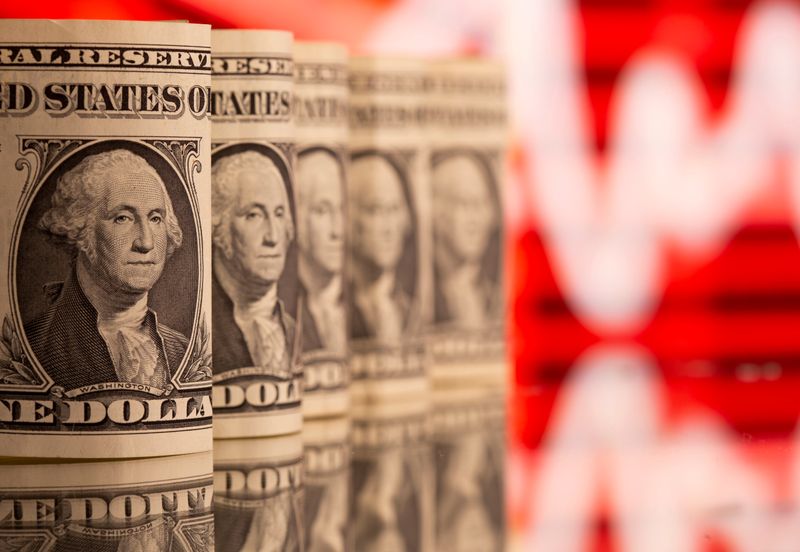 © Reuters. FILE PHOTO: U.S. One dollar banknotes are seen in front of displayed stock graph in this illustration taken

NEW YORK (Reuters) – U.S. Treasury auctions offering $271 billion of new debt and a key inflation report this week could end a recent lull in the bond market, reigniting a rise in yields that worried investors in the first quarter.

Treasury yields have dipped since April 1 during a two-week pause in issuance, reversing some of the dramatic rise in February and March. That eased concerns that higher borrowing costs will hurt stocks, particularly in growth sectors like technology, which have an outsized weighting in the benchmark .

Investors said weak demand at upcoming auctions, which kick off on Monday, could send bond prices lower and yields higher, albeit at a slower pace than in the first quarter.

“No matter how you slice it, supply auctions will be in focus,” said Justin Lederer, Treasury analyst and trader at Cantor Fitzgerald. Of particular interest will be the auction of both three- and 10-year notes on Monday, worth $96 billion in total.

The benchmark 10-year yield rose more than 80 basis points in the first quarter on expectations of blistering economic growth, higher inflation and the estimated $4 trillion in new debt to be issued this year.

A poor seven-year note auction in February sparked a run higher in yields, and drove the 10-year real rate – the stripped of inflation expectations – to the highest since June 2020. Even after markets cooled slightly in March, demand at that month’s seven-year auction was modest.

Monday’s double auction “will have some ramifications, but I don’t think we move substantially the way we saw in quarter one,” said Lederer.

The Treasury will also be auctioning $24 billion of 30-year bonds on Tuesday and a total of $151 billion in bills throughout the week.

“The next potential catalyst I see for the rates market is the CPI print,” said Eric Winograd, senior economist for fixed income at AllianceBernstein (NYSE:). “It shouldn’t be a surprise, but you might still get some sticker shock and a bit of indigestion.”

While the most recent Fed projections see inflation reaching 2.4% this year, well above target, the central bank believes it will fall back to 2% next year. The consumer price index, which does not map perfectly onto the Fed’s metric, is expected to have risen 2.5% year-over-year in March, according to a Reuters survey.

Some investors and strategists said there may be greater demand for Treasuries now than during March, which could cap any rise in rates. April 1 marked the start of a new fiscal year in Japan, ending a period of portfolio readjustment in which investors sold off Treasuries, said Meghan Swiber, U.S. rates strategist at Bank of America (NYSE:). “Japanese real money accounts were notably absent in March, likely because the combination of volatile rates and a stronger dollar kept a lot of buyers on the sidelines ahead of their fiscal year-end on March 31,” said Guy LeBas, chief fixed income strategist at Janney Montgomery Scott.

“Now, with those buyers back in and currency markets a bit more stable, the balance has tipped slightly in favor of demand.”