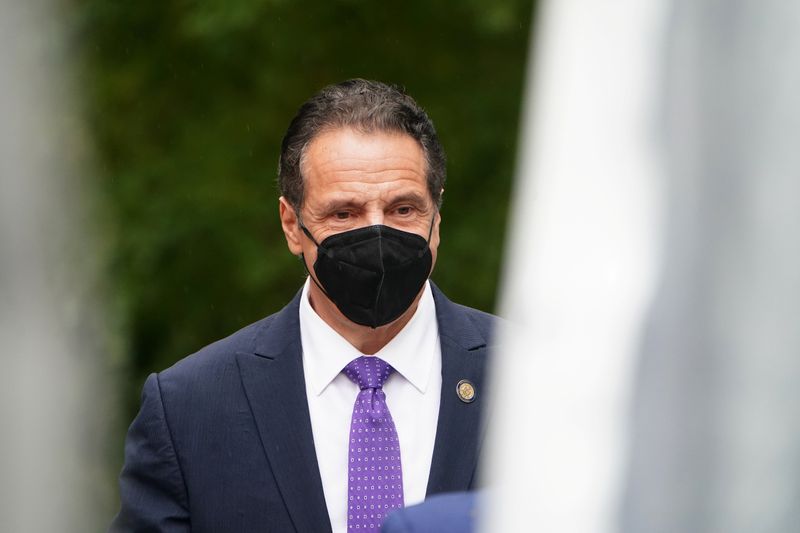 © Reuters. Governor of New York Andrew Cuomo arrives at the unveiling for the Mother Cabrini statue

(Reuters) – New York Governor Andrew Cuomo called on Saturday for an outside review following a report of sexual misconduct allegations against him by a second former aide, compounding problems for one of America’s most well-known Democratic politicians.

Charlotte Bennett told the New York Times that Cuomo had asked her questions about her sex life, including whether she was monogamous in her relationships and if she had ever had sex with older men.

Reuters has not independently verified the account and accusations by Bennett. She worked for the governor as an executive assistant and policy advisor for nearly two years until November 2020, according to her LinkedIn (NYSE:) profile.

“I was trying to be a mentor to her. I never made advances toward Ms. Bennett nor did I ever intend to act in any way that was inappropriate,” Cuomo said in a statement on Saturday.

He called for “a full and thorough outside review” led by a former federal judge and said he would have no further comment until it was completed.

Cuomo rose to national prominence for his leadership at the start of the coronavirus pandemic, when New York was the country’s COVID-19 epicenter.

The latest accusations came just days after another former aide, Lindsey Boylan, wrote in an online essay that the governor made several “inappropriate gestures” toward her while she worked for the state government from 2015 to 2018.

They ranged from sending her a rose on Valentine’s Day to kissing her on the mouth, she said.

Boylan is now a candidate for Manhattan borough president.

Cuomo denied those accusations in December and issued another denial this week. Multiple attempts to reach Boylan have been unsuccessful.

Bennett, who is 25, told the Times that Cuomo said to her in one encounter in June that he was open to relationships with women in their 20s.

Bennett said she discussed the interaction with Cuomo’s chief of staff Jill DesRosiers and was subsequently transferred to a job as a health policy advisor to the governor. She also provided a statement to a special counsel to the governor, Judith Mogul, in June, she told the Times.

Beth Garvey, special counsel and senior advisor to Cuomo, said in a statement that Bennett had been “consulted regarding the resolution, and expressed satisfaction and appreciation for the way in which it was handled.”

“The determination reached based on the information Ms Bennett provided was that no further action was required which was consistent with Ms Bennett’s wishes,” Garvey said.

Allegations about his conduct with female aides follow another major controversy that has dogged Cuomo in recent weeks.

A report from the state attorney general’s office last month cast doubt on the Cuomo administration’s handling of the COVID-19 crisis in nursing homes, saying that the state health department significantly undercounted the toll and implemented policies that may have contributed to it.

A top aide to Cuomo later told lawmakers the administration had delayed providing requested data about COVID-19 death toll among nursing home residents for fear of a politically motivated investigation by the Justice Department under the then-president, Republican Donald Trump.