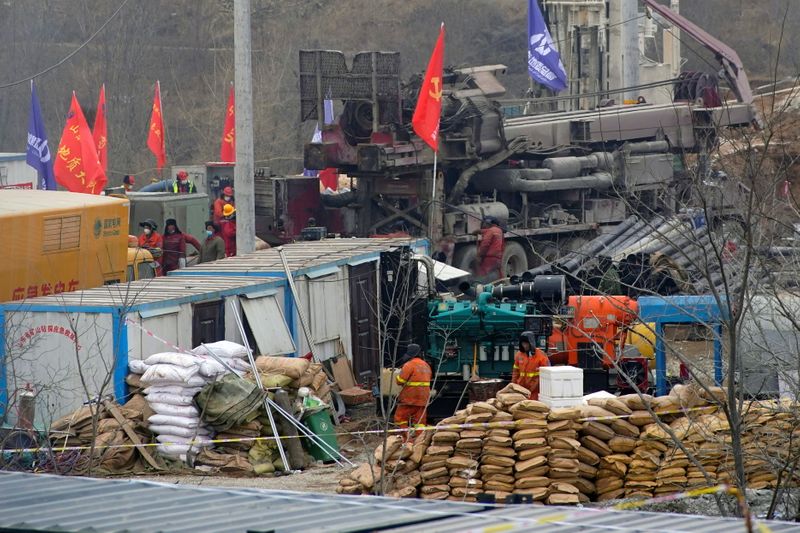 © Reuters. Rescuers work at the Hushan gold mine where workers were trapped underground after the Jauary 10 explosion, in Qixia

QIXIA, China (Reuters) – The ten known survivors trapped since a deadly Jan. 10 gold mine explosion in northern China have been using laser pointers and loudspeakers to try to find their missing colleagues, state media reported on Friday.

The rescue operation, which has been able to get food and medicines to the miners, was expected to take at least another two weeks, authorities have said.

“The physical condition, psychological condition and living environment of 10 miners in the middle section of the mine are good,” the People’s Daily, the official newspaper of China’s ruling Communist Party, reported on Friday.

“The miners continued to search for other trapped persons through laser pointer projection and loudspeaker shouting,” it said.

A total of 22 workers were trapped in the Hushan mine by the Jan 10 blast in Qixia, a major gold-producing region under the administration of Yantai in coastal Shandong province.

One has died and 11 were not in contact with the rescue teams, according to a Xinhua radio report on Thursday.

At least 15 days may be needed to clear the “severe blockages” as rescuers continued to drill shafts to reach the 10 men, officials said on Thursday.

At the site, security was tight on Friday and Reuters journalists were not permitted to get close to the rescue operation.

Workers in orange high visibility clothing could be seen operating heavy machinery. At the entrance to the site, a medical tent had been set up to administer COVID tests for rescue workers.

About 570 people are involved in the rescue, the newspaper said.

China’s mines are among the world’s deadliest. It has recorded 573 mine-related deaths in 2020, according to the National Mine Safety Administration.